Karen and Emily Celebrate Their Differences and Talk Self-Acceptance

We asked daughters and mothers to have a conversation about beauty, hair, and heritage. The result: timeless lessons and fresh perspectives, made to share this Mother’s Day.

When I was born twenty-five years ago, the sight of my mom and I together drew prolonged stares. Even though I was young, the perplexed looks weren’t lost on me. They went as fast as they came, but were still present for a breath and left an impression on me. Overall, I wasn’t really bothered by other people’s opinions and tried to move through life without considering outside input. As for my mom, she remained unbothered, too, for the most part. She’d proudly state that she has my birth video if anyone questioned my origins. But, as strong as an allegiance as we feel towards each other, we do look different. My dark, curly hair next to her light, straight strands is quite the juxtaposition. Below we talk curls, grey hair, self-perception and more. Did I have to cut out about half an hour of dialogue because she’s a Chatty Cathy who loves to digress? Yes. But, that’s just one of the many reasons I love her.

Karen: I’m thinking back to that piece you wrote about not owning a hair brush. You wrote some things that were terribly accurate concerning your hair and managing it when it was wet as opposed to dry. It was easier to manage. And the braids.

Emily: Right, what was the biggest challenge when it came to my hair?

K: I mean you had hair when you were born, so you always had a little bit of hair. But, the challenge was because it was growing so curly, it took a long time for it to grow long enough to put in a ponytail or do braids or anything. So there was a period of time when I didn’t know what to do with your hair haha. 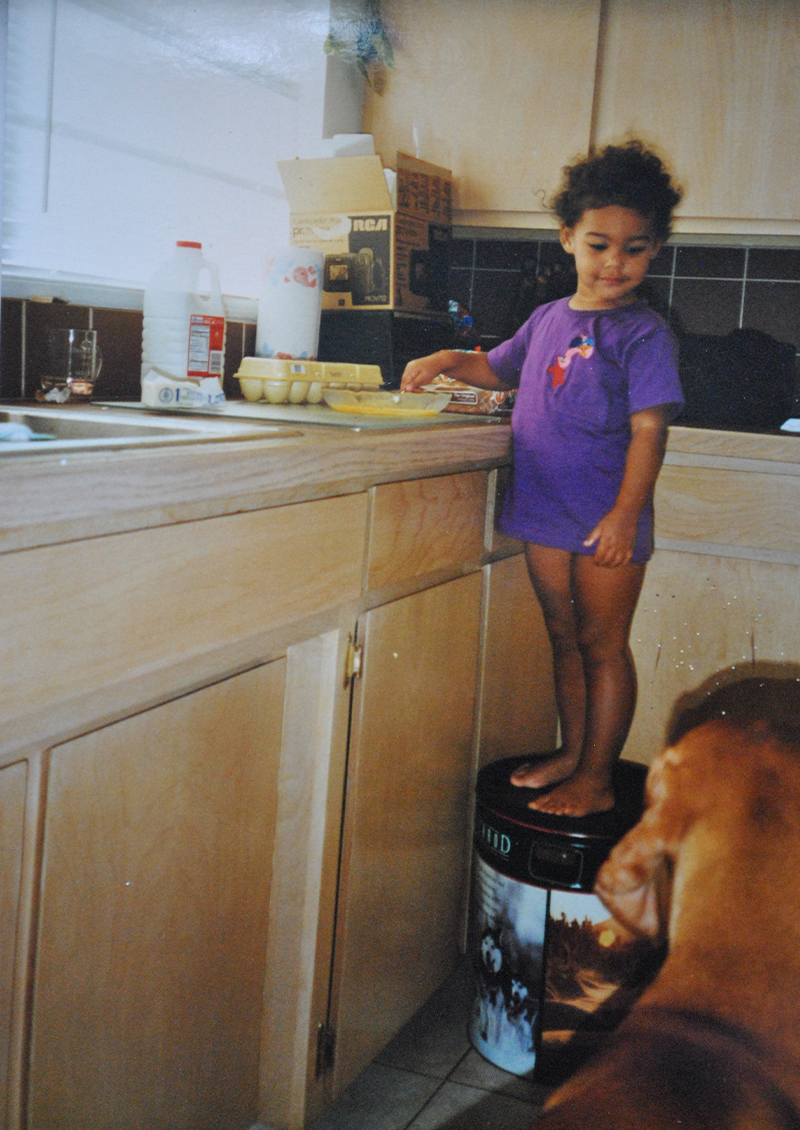 E: Yeah, honestly that’s super common across the board with mixed race children.

E: I feel like it’s funny. Did you think about that before I was born? You of course know who my father is and he has curly hair, but did you think that I would?

K: No, it never dawned on me. I knew you’d have brown skin, but I never even thought about your hair or what texture it would be.

E: Makes sense. I feel like if you have straight hair you tend to not think about hair in general, but when you have curly hair you’re super aware of the fact that you do.

K: Yeah, like I said it didn’t even cross my mind. I did have a few years in there where I was like, shoot, what do I do with it? Mostly I’d just put product in it and try to keep the curls intact and not have it be frizzy.

E: What kind of product did you use?

K: Some sort of hair gel. That’s all we had back then. We didn’t have anything good, you know, twenty-five years ago.

E: Huh, yeah I didn’t think about that part. We’ve come a long way when it comes to hair care.

K: Yeah, remember you used to use that product, um, Mixed Chicks? Oh no no, when you were little there was none of that. So it was just plain ole hair gel that I’d put on your hair when it was wet. Just to keep it from getting frizzy. Like I said, it took a long time for your hair to grow long enough to where I could do anything with it. The braids, oh my god. Those were amazing.

E: Haha yeah that was your favorite style.

K: Well it just kept your hair under control for school and stuff.

E: Yeah, for little kids I guess you just want it back and out of the way.

K: Exactly, for when you want to go out and play or go on the playground, you know, do stuff like your little cheerleading thing. All that kind of stuff. Because during that time when your hair was down, wow, you had hair that wouldn’t quit. It was so long.

E: It was always thick, too, right?

K: Right, so I think my biggest challenge was, you’re right, my hair is very different from your hair and then that time period when I just wasn’t sure. Like, what do I do?

E: Did you talk to anyone or ask someone for advice? I mean, it was pre-Internet, right? There wasn’t Google.

K: No, yeah twenty-five years ago it wasn’t like I could just go Google, hey what do I do with this hair? The only time I can really remember asking advice was when it came time to cut your hair. I was trying to find someone who was used to working with curly hair because I knew that would be really different than cutting my hair, you know? 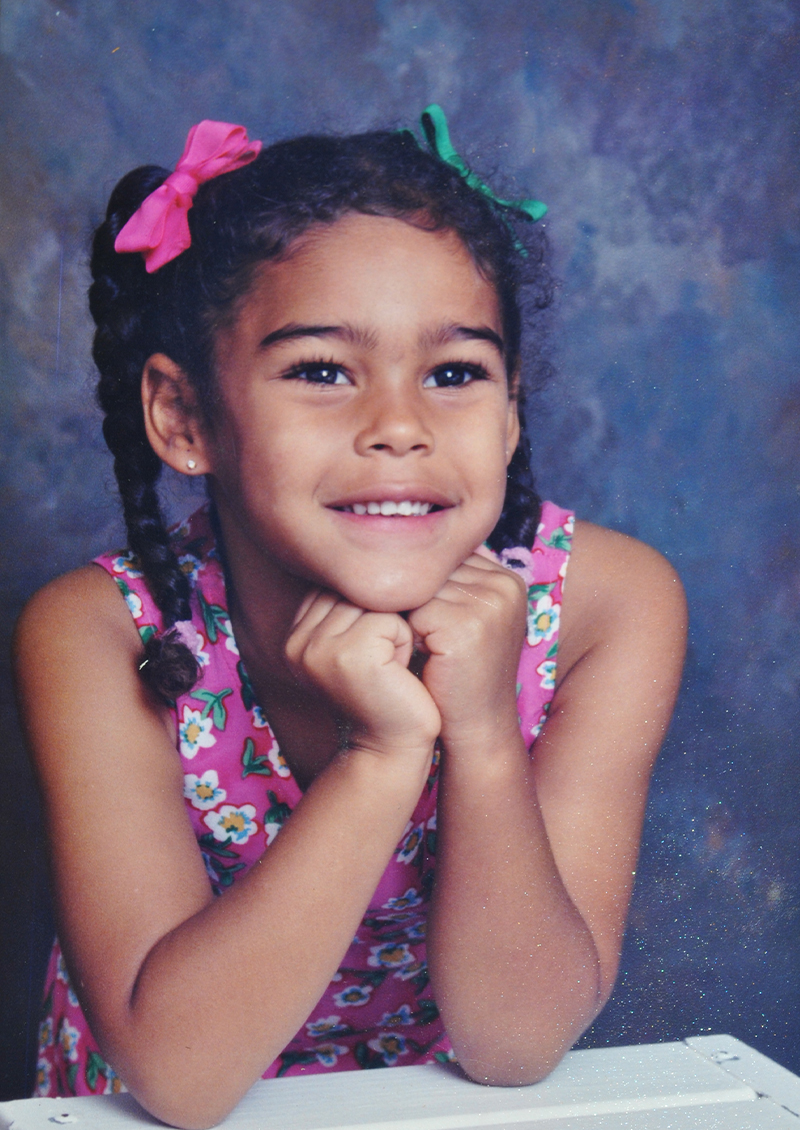 K: You didn’t end up liking the person we found but it was because you’d go too long in between haircuts so when you did eventually go she’d cut off a lot because the ends were so dead. But as far as asking advice that’s the only time I remember doing so. There was also that period where you wanted to straighten your hair.

E: Haha yeah I was gonna bring that up. How old was I when I started asking to straighten it? I’m very curious.

K: I mean you were old enough to do it yourself, so maybe thirteen/fourteen.

E: Oh ok, that makes sense. It’s kind of that age where you want to be like everyone else.

K: Yeah, it would take hours to do.

E: Oh I remember haha. It took two and a half hours.

E: My god haha. My hair used to be so much longer and thicker. Now I never straighten it. I just don’t think it looks as good as my curly hair.

K: No, your hair is gorgeous.

E: Thank you, yeah I appreciate it now.

K: That reminds me of something similar when I was growing up. It was if you had red hair you really disliked it. But now, people own being a redhead and appreciate it.

E: Yeah, I think with age you grow to appreciate yourself more for who you are.

E: Ah, well also, there’s a lot more representation now in the media of curly hair and there’s just more diversity being shown in general. It’s more in your face now, so you don’t feel alone or different because you can easily see that there are people out there like you.

K: Yeah! The models used to be just straight, skinny, all the same. And you’re right, just like hair, now you’ve got far more plus sized models, women of color, everybody represented. I forget what I was listening to or watching, but someone was saying that soon the population is going to be so mixed and ambiguous no one is going to know what is what and who is who. 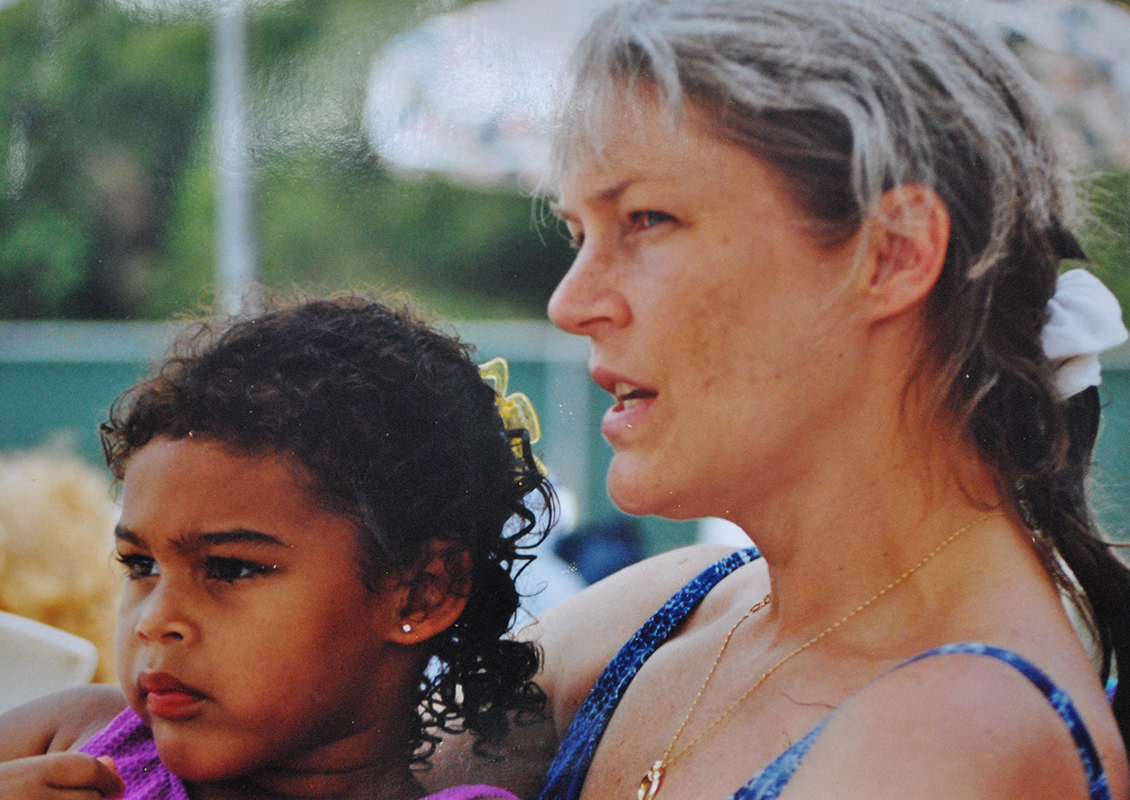 E: Yeah, I think that’ll take a while, but yes.

K: Mhm, it’s just so different now than it used to be and it’s only been twenty-five years.

E: Yeah I was going to say the same thing, it really hasn’t been that long. Did I ever give you a hard time about my hair or make negative comments about it?

K: I don’t think so. Except, when you would want to change it and straighten it and I would push back and tell you how beautiful your curls were.

E: Why did you feel so strongly about that? I remember you were adamant about me not ruining my curls. Like, you hated when I straightened my hair.

K: I mean it was beautiful when it was straight, too. But, for example, I look back on your graduation photos, some are with straight hair and some are with curly hair. Oh my gosh, the natural hair is just so much prettier. I think it has to do with your personality. Your curly hair represents who you are. It’s a bigger picture than just your hair.

E: Awh that’s so sweet. And I agree. I’m not sure, but maybe it has to do with me just being natural and not altering myself in any way. It’s so interesting how much deeper hair is than you would think. For anyone, not just someone with curly hair.

K: Yeah. It’s kind of like me going back to my grey hair.

K: The only reason I ever colored my hair, which I find so odd, was because of pressure from other people. Typically, I never let other people influence my decisions, but for some reason with my hair I did. At first I thought, ok I’ll do it for a year and see how I feel about it. I went past the year mark and kept dying it for years. But I just hit a point where I was like no, you know what, I’m just going back to grey. So similar to you, I’m much more me with my grey hair, like you are with your curly.

E: Yeah, it doesn’t feel great to have to alter yourself in order to feel confident.

K: That’s what I’m saying. All the sudden this level of maturity hits and you appreciate who you are and stand up for it. Like, I’m gonna be me, this hair is a part of me, and I’m gonna own it.

To read the other conversations click on the images below! 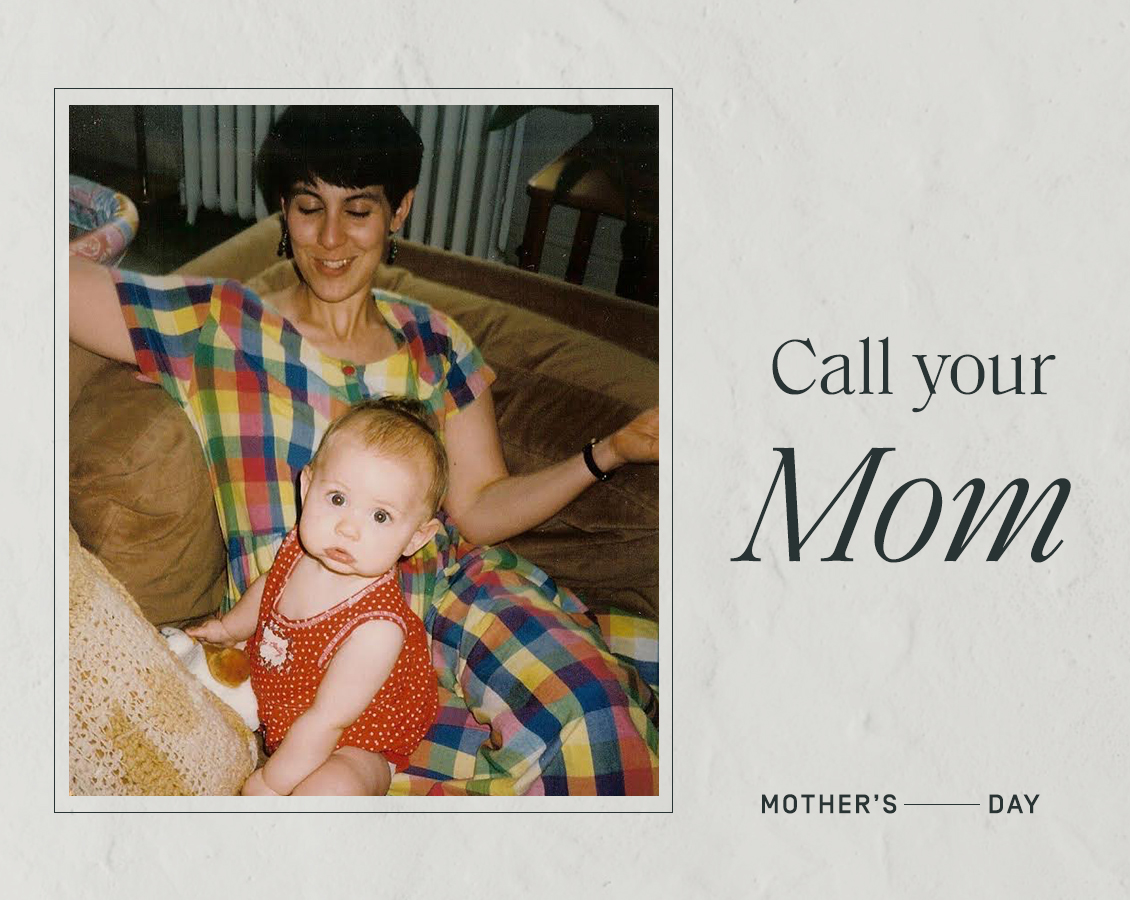 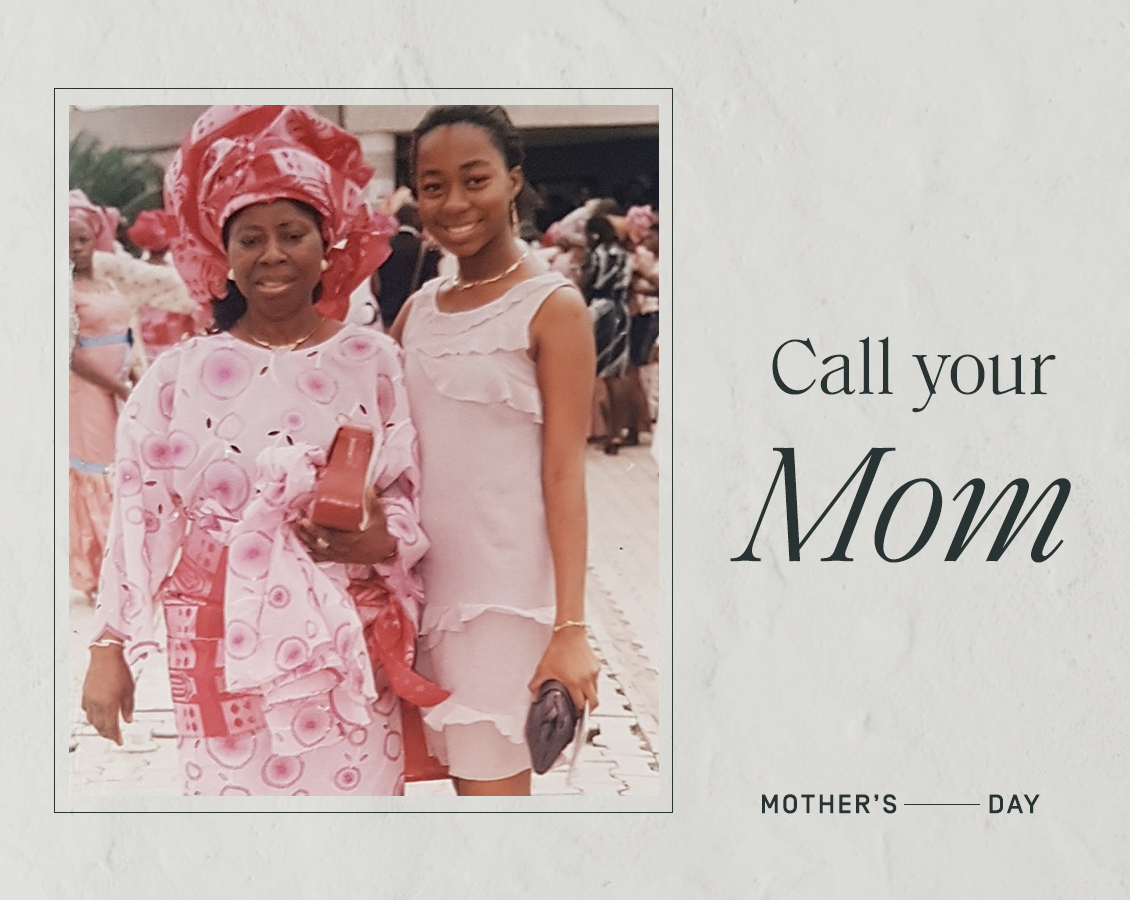